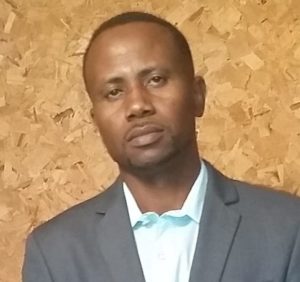 Khamiss Jumah Youssif has been President of the nonprofit since March 2013, and is a US citizen (he has also changed his first name from Abakar to Khamiss).  He has organized three annual meetings, and was one of the contributors of DOHS’s application for nonprofit status and filers of its annual returns with the IRS, including our 990 for 2015 (which he co-wrote and carefully explained to the other Board members as needed).  He currently co-administers the DOHS website and chairs the group’s Board meetings.  Born in West Darfur, he ran a food and dry goods retail business (responsible for accounting and inventory) while he was a refugee in Ghana before he arrived in the US in 2010 (where he was immediately made a translator for other new arrivals by Kentucky Refugee Ministries, a local resettlement agency).  Since arriving in America, he has become an independent cab driver, and later worked at Amazon.  He has also become a major asset to the sizable refugee community in his new home, Louisville, Kentucky, helping Somalians, Iraqis, Rwandans and South Sudanese in addition to Sudanese learn how to drive and understand things such as credit ratings, how to apply for work and schedule interviews.  He has also assisted sick and home-bound elderly new arrivals, taking them to medical appointments and picking up and explaining their prescriptions to them.   He studied psychology and mental development at Jefferson Community and Technical College in Louisville, Kentucky, but moved to San Diego, CA in February 2017.  He plans to use his education to follow a career in social work.  DOHS’s four current projects interest him very much, and he would eventually like to see the DOHS in Darfur, Sudan building and supporting schools.

Mohammed Abdulrahman has served as DOHS’s Treasurer since 2010, providing experienced accounting service to the nonprofit and handling all communications with our bank.  He also co-administers the DOHS Facebook Page and was one of the contributors to the group’s application for nonprofit status as well as a major contributor to the completion of our 990 for 2015.  Our refugee guides for education, self-confidence and goal-setting were written by him.  He was also born in what is now West Darfur.  He served as a translator for UNHCR for a year and a half, and also ran (and was the accountant for) a Darfur community aid group while he was a refugee in Malta.  He arrived in the US in 2009 and is now an American citizen.  He currently co-owns and operates a limousine service and also attends Regional College in Dallas, studying automotive technology.  He works with DOHS because he wants to help newly-arrived refugees in the US by offering translation services and other support, including literacy education.  He also want to help preserve the culture of the Massalit.

Haroun Hassan served as a secretary for the organization in its early years when he helped us incorporate within the state of Kentucky.   Now he rejoins the officers list and board as Assistant Treasurer.  Haroun is a US citizen and lives in Kentucky.

Abdulatif Isaac has been DOHS Secretary since May 2014, among other things taking minutes and filing annual reports with the Kentucky Secretary of State’s Office.  He currently oversees the preparation of DOHS’s literacy primer for illiterate Darfuris (see the What We Do portion of our main menu for a description of all our projects).  He also co-administers the group’s Facebook page, and wrote our refugee guide to keeping a clean house and being a courteous neighbor.  Like Mr. Youssif and Mr. Mohammed, he was born in West Darfur.  From 2009 to 2011 he served as a translator for UNHCR while he was a refugee in Kakuma camp in northwestern Kenya; he also taught leadership classes to children at one of the youth centers there.  He arrived in the US in 2011, and now attends Truman College in Chicago, Illinois to prepare for a career in social work.  He looks forward to the day when DOHS works overseas.  He also works as an on-call translator for Catholic Charities in Chicago.

Mokhtar Abdallah has served as DOHS Secretary and is currently Assistant Secretary (for a combined total of four years).  While he was Secretary he was in charge of meeting minutes and filing as needed with the Kentucky Secretary of State’s Office.  He now serves as a mentor and assistant to Mr. Isaac.  He was born in West Darfur.  While he was a refugee in Krisan Camp in Sanzule, Ghana he taught thirty people how to speak English and, from 2007 to 2008, he was a Red Cross volunteer assigned to distribute medicine (he also made sure refugees knew how to get medical help and the right medicine at the hospital).  He arrived in the US in 2009 and is now a citizen here.  He currently studies computer programming at Southeast Technical and works as an equipment sanitizer at a meat packing facility in Souix Falls, South Dakota.  He uses his work with DOHS to improve the lives of Darfuris in the US and Sudan.

Mohammed Adam has been Vice-President of DOHS, Inc. since 2014 and among other things leads efforts in our clothing, shoes and blankets collection (see our “What We Do” page).  He also carefully reviewed and helped to explain our 2015 990 to the rest of the Board prior to submission to the IRS, and also wrote our refugee guide to financial independence in the US.  He is also from West Darfur.  He came to the United States in 2012, and has studied nursing with additional coursework in literature, math, history at Baltimore Community College since 2013.  He also has served as a volunteer and more recently as a paid employee for the International Rescue Committee, and has also worked as a translator and mentor for new arrivals for the Baltimore Medical System.   He works in DOHS to help refugees because “I know what they go through in the US and Sudan.”  Like the other Board members, he would like to see DOHS help refugees and internally displaced persons in the Darfur and surrounding regions,  helping ensure they get enough water, good health and education.

Mohammed Abdulkarim joined the Board in October, 2017.

Phil L. Nippert has been an assistant to a few of the officers since 2010, and has been the registered agent in Kentucky since 2011.